Rosemary and Catnip for our Rumbley

Last Friday was a very emotional day for my husband and I. Our oldest male cat Rumbley passed away. Rumbley was a very special member of our family for many reasons. He is the cat that enticed my husband into becoming a totally Pussy (cat) whipped kind of guy! :) 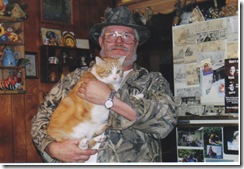 I have always had an affinity for cats. When I was a child growing up on a farm outside Lewistown, IL, we frequently had cats dumped on our road, and my folks were always cool about letting me adopt them. I remember finding a solid black kitty once that after my dad and I bathed it, (getting thoroughly shredded in the process), ended up being a white cat. We had one mama cat who came inside alot, but most of our cats lived in our barn and gardens and were just part of how I grew up. So loving cats is just part of my makeup and throughout my entire life I have co habitated with many wonderful cats.

My husband on the other hand… not so fond of them and never had lived with one. Now this created problems for my future husband and I’s romance as far as ever getting married and living together and this is where Rumbley is actually a catalyst on getting us married. I had been divorced for about ten years, and Gerald had been divorced about 18 years when we met. And whereas we enjoyed each others company and dated exclusively, I just never really wanted to get married again, and a big part of that is because I would never give up my cats, ( I had several older cats living with me at the time), and Gerald, well he really just never wanted to live with one! Well, we dated around three years, maintaining seperate residences and that was cool with me and then entered Rumbley into our lives.

Gerald has some neighbors that moved back in 2002, and when they moved, they abandoned their two full grown male cats. So here comes these two cats roaming around Gerald’s yard and I convinced him to let me put one of the dog boxes he uses to transport his hunting dogs, onto the front porch to at least give these two kitties shelter while I tried to find them homes. I was able to place the one but was having trouble placing Rumbley. Seems there must be alot of ginger tommy cats roaming this world as the black fluffy one was easily placed, but poor Rumbley, being rather a common place color, full grown and unneutered, just wasn’t as attractive to prospective adoptive folks.

Life is funny though and the longer Rumbley stuck around the yard and followed Gerald around, well, I could see them starting to bond. Gerald had a ladder propped up against the house outside the kitchen window and Rumbley took to climbing up it daily and watching what Gerald was doing, and in my journeys in and out of the house, I could just see that the tides were changing in Gerald’s attitude.

Time passed and one day I stopped over for lunch, and as we were leaving the house, me for back to work, and Gerald to go in on second shift, here comes Rumbley. But this time, he is hurt! Something had happened to his back end and we didn’t know if he had been side swiped by a car, kicked or what, but he was seriously injured. I wrapped him up to bring him to my apartment to tend while Gerald went to work. When I got him to my home I could tell, from seeing it happen to kitties before who had run ins with vehicles, that he had a broken pelvis. Not much that can be done for that generally, just time, so I made him comfortable in the spare bedroom and figured I had another cat! Not to be though. That night when Gerald got off work here came a phone call,”How is MY cat? When are you going to bring him HOME?” LOL Yup, Rumbley had won Gerald’s heart and soul and that night moved in with him and they were thoroughly bonded for the next 8 years.

Rumbley was not a particularly loving cat to anyone but Gerald when he was younger and my first grandchild Evan, got many of side swipe scratches those first years if he got too near or tried to get to friendly. Hell, when Gerald and I got married about 6 months later, when I was alone in the house with Rumbley he would attack my ankles periodically and I had stragically placed water bottles throughout the house! 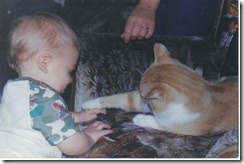 I got back at him though, the week after I got married I took him and had him neutered and he started mellowing out a bit after that!lol

So for quite a few years our Rumbley has been our alpha male kitty, ruling the roost from a basket right on our kitchen table. He always was a benign surrogate to the assorted kittens that have found their way here to Comfrey Cottages and he and I became comfortable with each other and he and my husbands bond grew.

This last year I could see time catching up with him. He seemed to lay in his basket more and get a bit thinner, but we all slow down over time. He still was always the first to investigate when I brought in a new harvest, and we never suspected he was sick 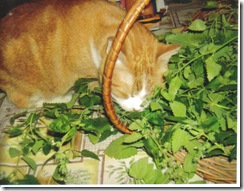 In December we noticed some changes that we felt needed checked by the vet. Well, the long in the short of it was our Rumbley had cancer. He will be sorely missed and my heart is just too raw to go into details, but I felt a need to share with all of you, my dear Comfrey Cottages visitors and friends, why I have been a bit absent lately. And to write a bit of a tribute to one hell of a cat who I will miss. I have no idea when he was born but I will always remember the time I did share this lifes journey with him. 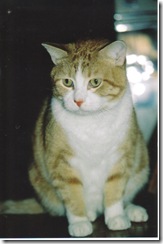 We buried him between our white pine and my native wildflower garden and before we closed his little grave, I sprinkled rosemary for remembrance and catnip on his little coffin. I will never forget you Rumbley!

Dylan and I are in our paper!

dylan and i enjoyed the lapsit at our library monday. that is me in the plaid shirt and dylan or my lap:)
Posted by Comfrey Cottages at Wednesday, January 13, 2010 12 comments:

And the winner is….

Our dear Anke! Check out her blog Our Little Piece of Heaven for wonderful craft, baking, gardening and other cool things. Plus her girls are just adorable! Big hugs to you anke and i have your address still from when we exchanged seeds. I will get this right out to you:) thanks to everyone for all the interest:)

White Sage and other updates

Hello everyone! The holiday times were just so busy i didn’t really have time to blog. Little grandson spent some time in the hospital, my old cat rumbley got sick, husband home on layoff, and older grands out of school… you get the idea:)

wanted to share with you a new herbal adventure i made this week. i finally had a day at home, no children and husband off doing things. i should have felt great right? strangely, i didn’t! i just felt rather at ends, out of sorts, uncentered and rather pissy about feeling that way! i remembered reading on one of kiva rose’s blog posts, about how she just loved her sage oil for those sort of times and i thought, ah ha, my sweet friend katee gifted me a bag of white sage, now is the time to do something with it!

so i got out the bag of sage, and started heating some olive oil up. added the sage and just let it steep for about an hour. in the pic you can see how dark the sage got the longer it steeped, the lighter pieces where the freshly added ones. i ended up adding some extra to the pot 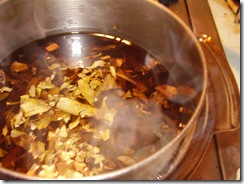 this picture is how light it looked before i added it to the oil. 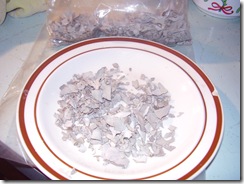 while it was infusing, i was amazed by the smell. very resinous, earthy and gradually i realized, i was starting to feel very grounded. like i was floating right back into my own skin! after it had infused i strained it out and had a very lovely, dark, dark amber colored oil, which smelled so different than anything i had smelled before! i rubbed some into my pulse points and wow, shortly, i was back, totally feeling normal, focused and eager to keep doing things. so the next step for me is always so second nature anymore when working with oils. whereas i adore oils, i am a bit of a klutz sometimes and find them kind of messy to deal with so i almost always make them into a salve. so added a bit of melted beeswax until i liked the consistency and now have my new grounding salve:) gorgeous color and unusual scent. it might take some getting used to for some folks. my husband came in and asked what the smell was declaring it smelled bitter and he didn’t like it. but funny thing, about an hour later he more gently asked, what was that you made. i could tell the scent was working on him also. thinking this salve will be like a rescue remedy for me and i can see its applications for the children when they are very restless, argumentative, etc.

here is a picture of the finished salve. which i intend to keep handily in my purse. another great thing about salves, not as likely to leak out! 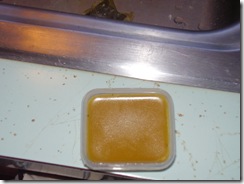 now i must include a link to the wonderful article kiva wrote about sage. she is such a wonderful writer and i suggest you check out her article on sage. there are many, many ways to enjoy and benefit from sage, this story about the salve is just one example, and i thought you all might enjoy it.

to celebrate the new year and to made amends for being absent for so long, i would like to offer one of these salves as a giveaway. just leave me a comment and i will draw a name next friday:)

herbal and honey hugs to all who visit comfrey cottages:)