Hamida the Herbalist: Basic Herbs for Home Use - Part I

Hamida the Herbalist: Basic Herbs for Home Use - Part I
just saving this post with a link to an awesome radio broadcast.
Posted by Comfrey Cottages at Tuesday, December 08, 2009 4 comments:

Herbal Roots Zine is giving away a copy of Wildcraft Game!

Herbal Roots Zine is just a wonderful tool I use with the children for learning about our natural world. Kristine Brown does just an amazing job illustrating this monthly pdf magazine and it is always just chock full of fun activities, crafts, lore, puzzles, coloring pages, word searches, etc of each months featured herbs. I strongly recommend it for anyone with children in their lives, the beginning herbalists, or just anyone who loves beautiful art and verse:) This week Kristine is giving away a Wildcraft Game from Learning Herbs for one lucky winner. Thank you for all you do Kristine:)

Why don’t you try Herbal Roots Zine today? You will love it! 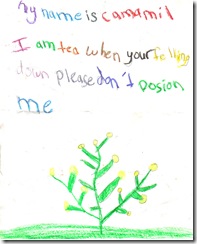 This spring the children and i chose chamomile as one of the plants to study this year. we found it growing wild all over our town, but especially in spots that had been disturbed. tenacious chamomile could be found growing in many well trampled spots and rock covered driveways. one of those driveways was my son tommy’s. we talked about how it wouldn’t be good to use chamomile from this particular spot, since the car fumes would be all over her. it was so cute to hear all the grandchildren point her out and talk about her every time we were outside and during our many summer walks, they took great pride in identifying her almost everywhere we went. we also talked about how some people are just so anal they think that any plant that has the audacity to just pop up where ever it wanted, is considered a plant that needed exterminated and used all sorts of chemicals to destroy dear chamomile. my 10 year old granddaughter taylor drew the adorable picture at the top of this post as her response to that! i hate talking about the meaness people do, such as chemical warfare on dandelions and chamomile, but so heartening to have to the children express their dismay and to know that they are growing up with a different mind set:) we talked about how chamomile just loves us know matter what and was always there for us even though we might walk or drive on her. how she could help lighten our hearts when we felt down. we learned that she will help our stuffy noses and colds, and help us feel relaxed when upset or nervous, and help our tummy troubles or scrapes and rashes.

this is a picture of the 8 year old even and breven both enjoying a cup of chamomile tea and our own honey. they decide to make themselves some chamomile tea as evan had a stuffy nose. breven’s favorite fruit is pineapple, so he really enjoys chamomile light pineapple taste and smell. 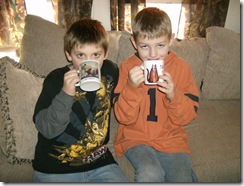 the boys then decided it would be nice to make a salve using chamomile, organic coconut oil and our beeswax. this salve can be used for scrapes and rashes but they wanted to make some especially for christmas presents for their 21 month old cousin dylan and 10 month old cousin ariana, to help soothe any diaper rashes they might get! isn’t that too cute? first the boys put some chamomile in the melted coconut oil to infuse 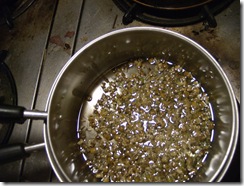 then they started some beeswax melting in a double boiler arrangement 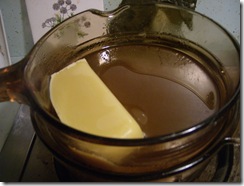 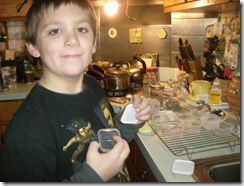 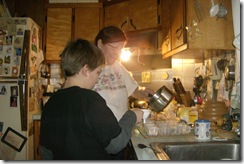 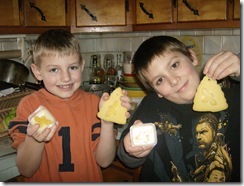 now chamomile was not a new thing for miss lily lynn (age 5). i had the joy of being able to mind lily during the years before she started school and so she has been enjoying her special “flower” tea for years 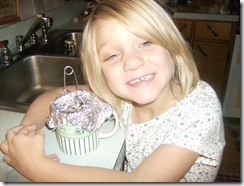 notice the foil on lily’s cup? we always put something on top of our cup so the good steaming essential oils stay right in the cup while brewing:)

well i hope you have enjoyed seeing the various ways the children and i have enjoyed dear chamomile and have inspired you to make her one of your allies also! sweet chamomile is a good friend to all of us of any age and very safe and effective. i invite you all now to click on this link and read how my dear friend lisl has shared even more about chamomile with us!