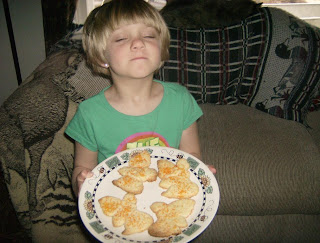 This particular prize was an adorable cookie cutter and sprinkles for the cookies with a fairy cookie recipe! I just want to say thank you to all the blogs hosting these giveaways and to share the picture of my granddaughter lily and her plate of fairy cookies she made! thank you so much karen for putting a smile on our faces and a fairy in our tummies!lol
Posted by Comfrey Cottages at Sunday, March 29, 2009 2 comments:

Wow, the first day of spring is a historic one for any beekeepers, or organic/backyard gardener! This article was in the Bee Culture newsletter and I wanted to post it here in case someone missed it! I am thrilled and proud of our CURRENT presidential first family!! I will come back and post here as new pics and info comes in about this!

An Organic Garden and honey bees move to 1600 Pennsylvania Avenue.
From the perspective of probably every beekeeper in the U.S., the first day of spring, 2009, should be one of the most memorable in decades. It was on that day that Michelle Obama announced that not only would there be a garden on the White House lawn, the first since FDR’s Victory Garden, but there would be, yes, BEE HIVES!
The chefs at the white house are looking forward to cooking with locally grown fresh vegetables (and sharing what they can’t use with a soup kitchen near the White House), and being able to use honey in some of their recipes. Honey produced right outside their kitchen door.
Mrs Obama readied the garden plot on the first day of spring with the help of a couple dozen local fifth graders. They worked to remove the sod and loosen the soil in preparation of planting of the spring crops. The L-shaped plot will contain year-round vegetables once completely established, with vegetables, berries and other tasty edibles. All will be raised organically.
To complete the garden, two bee hives will be moved in early this week. They will be managed by a White House employee who is a beekeeper and lives nearby. The hives belong to the beekeeper.
We found out that the beekeeper was a subscriber to our magazine, so we had a contact and were fortunate to have a phone conversation late last week. But, of course, there has to be some preparation for all this, so everything we discussed had to remain off the record. He is, however, a three year veteran beekeeper and had a strong desire to keep bees and beekeeping in front of the folks who live where he works, and to keep reminding them of the importance of the pollination efforts their bees will be performing.

As far as we can tell, there’s never been a bee hive at the White House, so this first-ever apiary event is something that beekeepers everywhere are excited about. The calls and contacts received in our office once this broke exceeded any event in the 23 years I’ve been here.

At the ground breaking on Friday the kids, with the help of the First Lady removed sod and started the process. In a couple of weeks the planting will take place. The early spring garden, as with many early spring gardens will be red romaine lettuce, oakleaf lettuce, sugar snap peas, butterhead lettuce, radishes, shallots and shell peas, onions, chard spinach, kale, collards and a host of herbs including sorrel, thyme, oregano, sage, rosemary, marjoram, chives, chamomile, garlic chives and hyssop. There’s also carrots, dill, cilantro and parsley. Some mints and rhubarb will be going in too. Later, squash, tomatillos, some berries, and perhaps more, since the garden is to be a year-round source of vegetables.
The L shaped garden is 40’ tall, 40’ wide at the bottom, and the width at the top of the L is 20’. There are marigolds, nasturtiums and zinnas lining the two walkways through the garden. Several raised beds surround the garden.
An organic garden and beehives at the White House...it doesn’t get much better, does it?
This message brought to you by Bee Culture, The Magazine Of American Beekeeping
Posted by Comfrey Cottages at Sunday, March 22, 2009 No comments: 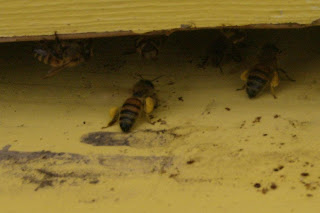 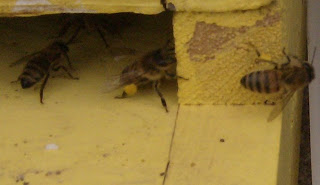 It has just been gorgeous weather for about 5 days now. Lovely sun with highs in the 70's at times. Lots of trees are forming their buds and my bees have found these sources of pollen. I thought you might enjoy seeing some pics of them coming home with their little pollen sacs loaded. See the little globs of yellow on their back legs? Some of the pollen i have seen them carrying has been an orangish color also. The bees will make a bee bread to feed the little larvae if the queen has started laying. She stops during the winter but when the weather warms, and there is pollen to be gathered, she instinctually gets ready to lay. Our weather is suppose to change again for the following week, high's only to the 50's and nites back to the 20's, so still a bit of time before the queen starts laying prolifically I hope. I want to be quicker with putting on my honey supers this year. The type of bees I have left are Carniolans and they are fast to build up in the spring and a wee bit prone to swarming easily. So I must make sure and put the honey supers on quickly so the worker bees will be able to store the surplus honey in them and save the brood chambers for the queen and the new bees use. When the queen has a hard time finding a place to lay the eggs, the hive is at more risk to swarm.

Have you seen any bees out yet where you live? My brother saw a big carpenter bee come out from the wood under his porch today! I love those large bees, they are so cool!