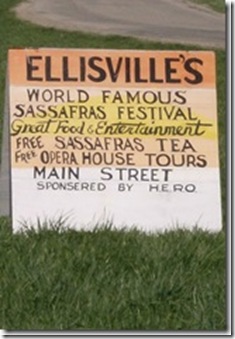 Sarah Jean Head, of Tales of a Kitchen Herbwife, chose the theme of Bark Medicine for this months UK Herbarium blog party she is hosting. When I think of bark medicine, the first tree that comes to mind is sassafras! Sassafras is our localities spring tonic. Every April, in the small town of Ellisville, there is even a Sassafras Festival. The event is hosted in the old Opera House by one of the local civic groups, HERO. Every year my husband, brother Eric and I go and belly up for some free sassafras tea and a nice dinner, they also have. Most of the folks we are seated at long tables with are older farmer and country types and most probably have never thought about constituents or any other term herbalists use when talking about plant medicine. They just know it is a tradition handed down through all our generations, and one we learned from the local Native Americans, to in the spring, dig some Sassafras root,  and brew up some of this spicy, blood moving, blood purifying root bark tea! It actually is a decoction, as we do put the root in a pan with water and slow simmered.  I think it tastes best done at a slow simmer, keeps it sweeter, than at a strong boil, which can make it a bit bitter. It turns a nice red color and can be sweetened with a little honey or sugar and be drunk hot or cold. You can use the same bark/roots several times before they loose their flavor. Just let them dry out again or pop them in the freezer till next use. 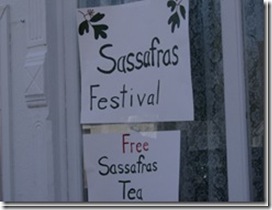 Sassafras, Sassafras albidum is the type I am referring to in this post. There are two other types in other parts of the world. In North America, it grows in Ontario, Canada, and in the US, from Maine west to Michigan and all the states south of those states clear down to Texas and Florida. Identifying Sassafras is so easy as its scent gives it away! One of its names is Cinnamon Wood and it has been credited with having been an aid in the discovery of America! The story goes that Christopher Columbus was able to persuade his mutinous crew that land was near, by drawing their attention to the smell of sassafras fragrance on the breeze! ( “Trees and Shrubs of Massachus, 1894”). Other identifying features are its leaves. The are bright green above and downy beneath, and often three-lobed, unlobed or mitten shaped lobed! In the fall they are beautiful, ranging from red, to yellow, to pinkish even. The flowers, in early spring are sweet smelling and delicately colored a yellow green. The fruit is tiny dark purple on a red stalk. Sassafras is usually a small to medium tree about 40 foot tall, (although there are some which grow to upwards of 100 foot in other locals). It has stout, contorted spread branches. It spreads by root suckers and often forms thickets with domed crowns. The easiest way to harvest it is to dig down between two trees and take some of the root that is suckering between them. Although, sassafras is very tenacious and old farmers say if you pull up one sapling, unless you grub out every bit of root, two will grow back for each one you take! I usually find it as an understory tree in the woods or along fence rows. 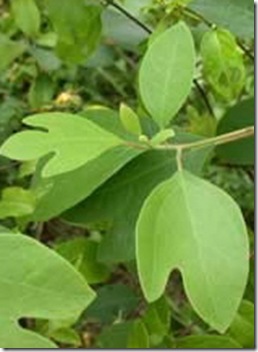 Wonderful post, filled with lots of good information. Besides just making tea out of it (I love sassafras tea) we make it into a tonic with sweet birch and spicewood. As a kid I remember telling my aunt I wasn't feeling well just so I could get a glass of this tonic. lol

Thanks for the interesting post; sassafras isn't well known across the Pond, so you've enlightened my Monday!

Thank you Leslie, this is really informative. I've seen sassafras mentioned in books but didn't know anything about it. Shame it doesn't grow over here! x

Leslie, this was a wonderful post! Extrememly informative! I have actually met Daryl Patton and have taken a class from him. Nice guy. Love the Tommie Bass info.
I sure wish you were closer to me! Forageing would be such fun! Not to mention all the other things we could do.....
Pat

I LOVED this post! I really enjoy the taste of Sassafras tea and I would have a cup every day except I was told that it thinned the blood and regular use would promote to internal bleeding. I'm so glad to know it's OK. I'm going to try it with vinegar and honey, it sounds quite tasty.

I have planted three Sassafras trees on my land. We were at a motel in Arkansas many years ago and there was one around the swimming pool. I admired the tree and always wanted to have one.

Thanks for doing this post, it's a real gem!

Hi Pen! Thank you for visiting! Stay tuned as I plan to host a give away and the winner will win a bit of sassafras mailed to them:) xx
Jackie, I feel so bad I can't contribute to the work at the sanctuary, so to make up for it, i plan on mailing sarah some sassafras to share with you all. as well as host the giveaway soon i mentioned above:) thanks for visiting xxx
Pat I am sooo jealous! How in the world did you take a class with Daryl? Did he host one in your area? I too wish we could hang... maybe this summer? xxxx
Thanks Ilene, that is so cool you plant some trees! I dug up some saplings last fall and they are just greening up so there will be planted here some at the home gardens also:) Great minds think alike! If you have no health problems, I think sassafras is safe to drink in moderation. I think because there are precautions there has been a lot of embellishments in folk tales on the dangers of drinking it. Everything in moderation though!! big hugs and thanks for visiting! xx

Thank you Rita! Glad you enjoyed it:) love you my sis!! xxox

What a great post Leslie! I remember sassafras from when I was little, and when we would go to see my grandparents in N.C. I also believe we have one growing up the hill so I will definitely check it out.
Big hugs sent to you!
Ulrike

Thank you for educating & sharing!! I had never heard of Sassafras & now I know sooo much about it. You're soooooo knowledgable I wish you lived closer too, we'd for sure share the walking, foraging, talking, cooking, eating, partying , dancing lol & yes all of the other things- all fun things :) (Pat whereabouts are you :)

My stepdad brought me some fresh sassafras once, and it was delightful! What a memory.

What a wonderfully comprehensive post on Sassafras. I absolutely love sassafras tea! Such a rich color and such a delicious flavor!

Daughter of the Porridge People said...

Thank you for this post and for being here in the world of Internet where I can stop by and we can be neighbors.

thank you for stopping by daugher of the porridge people:) do you have a site I can visit? xx

Trying to find outwhere Ellisville is! which state please?

If it is near,I want to join Sassafras Fest. It is almost April!