“ In the body the four elements ; Earth, Air, Fire and Water are known as the four Humours, and give rise to the four Temperaments; Melancholic, Sanguine, Choleric and Phlegmatic, respectively.”

Continuing with my January Springfield Sanctuary assignments. We were given a list of questions to read through, tick the statements that applied to ourselves, and get an overall picture of which humours we were dominant in. We then had ideas to implement, to help find our humoral balance. 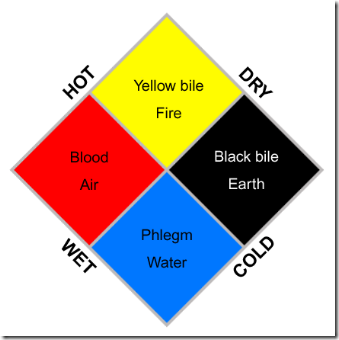 photo from Wikipedia Commons with release to public domain

These are my results:

Now I see where Earth/Melancholic is the lesser of the humours, but... when you divide these up into body/physical aspects and mood/social aspects, it changes a bit.. which I found interesting, but I am hoping that by making the following dietary/ exercise,( I talk about at the end of this post), all will come more in line!

Sanquines need to avoid excesses of all kinds, especially rich food, alcohol and sex. I suppose cutting back on butter… sigh, real butter and cookies, cakes and candy… never mind.. damp and heating foods such as honey, wine and mead… well I AM a beekeeper… so right, cut back on the honey… sigh, excess amounts of dried fruit, sugar, garlic and onion…. right then, butter, dried fruit, honey, sugar moderation.. use less…lots less

Do take, beer, cider, water, soups with barley, vinegar, pickles, wild meats, fish, salads and summer fruits…. I do adore cider and barley, use vinegar daily.. but can up that, wild meats, salad ok… summer fruits.. good thing I have some peaches canned, and some blueberries and raspberries frozen from last year. I don’t really like beer, and when I do drink, which is rarely, I do prefer mead, but since that is like once a year, inconsequential.

Eat regular meals and avoid eating between meals… ugh, schedule meals better, ok will do. Will have to think about how to not eat between meals, as I tend to be a grazer.

Do cultivate one person or find a central interest to life. Express that excess air by singing, writing or expressing ideas. Best stick with writing or the idea things…

Useful herbs: bitter herbs in general;cooling and softening herbs such as violets, mallows and plantain; herbs that clear heat from liver and digestive system such as Rhubarb root or Meadowsweet; herbs that clear heat from the skin, like Burdock root and Yellow dock; herbs to protect heart from heat like Motherwort and Lemon Balm; cooling sedatives like Wild Lettuce and Hops for insomnia or over excitability (Valerian might be too warm for Choleric people)

Cultivate respect for authoritative figure and exercise self discipline. Always have a project preferably one with clear aims that doesn’t take too long.  Self discipline will come into play making the dietary and exercise changes!

I am thinking that if I make a few changes in my dietary and exercise routines, all 4 humors will come more in balance physically. I believe I will leave off that second cup of morning coffee and aim to just walk briskly around the neighborhood for 15 minutes or so in the morning. Get my husband to go fishing with me and add more fish to our diet, along with the wild game we have in the freezer. Add more blueberries, raspberries, drink more cider and use more of my Hawthorn or Motherwort vinegars. I guess I will try to limit my honey to mainly honeygars made with either of those two vinegars and also use those vinegars on salads and veggies. Make more clear soups, (another biggie as I prefer creamed soups),  adding barley and Burdock root.  Maybe the Wild Lettuce to ensure a good nights sleep, since I have an excess mark in my Choleric/Fire part… I think a tea I might enjoy that suits would be Chamomile, Linden, and Lemon Balm. I just made a Yellow Dock and molasses syrup, so maybe a spoon of that a day..And cut back on heavy, damp foods and stimulants! Less butter, less coffee and chocolate :(, less gravies! Leave off as many dried fruits and go for more fresh (well, my frozen/canned ones… I do adore dried fruit so this is a biggie). When spring arrives I can add fresh violets and summertime, fresh mallows. I have both as tinctures, but I don’t use tinctures a lot as I find them very warming… I have Meadowsweet tincture too, so maybe a Violet, Mallow, Meadowsweet and Dandelion tinctures mixture occasionally. Chamomile is a bitter herb, so that helps with adding bitters to the diet. I will add lots of dandelions, which are a bitter, when they start to appear, which shouldn’t be long the way our weather has been! I should order some more Dandy Blend, as that could be substituted for the times I typically want a cup of coffee. I like it plain with no sugar, so that would help with sugar intake also:)

Now since my mental/mood outcomes were almost completely opposite, I decided I might explore those things they suggest for those of us with a Phlegmatic/ Melancholic mind/mood.

Looking at Melancholic ideas, I get slapped in the head…” avoid thinking too much and getting caught in introspection.” Considering how many days I have thought about this handout, considered the differences between the body and mind aspects, and also thought about, as was brought out, that our ancestral gene pool can be a factor, and also compared pre and post menopausal self profiles… yes, I do think too much! lol! Ok, right then, try and back off a bit on that…"Always have a big project on the go-one which requires deep thought but also gets ‘you out of yourself’ “ Hmmm I will have to think about that one some more… lol! Also suggested is more activity. Herbs to clear melancholy Borage and Motherwort.  No Valerian, as  suggested as too warming to my physical constitution, but again, Linden and Lemon Balm.

Phlegmatic ideas, regular gentle exercise and co-operative ventures.. again, like above, something to think about as I can be a bit of a loner… already decided should start walking more. “Avoid getting caught up in emotional introspection-find creative ways of expressing deep emotions. Keep clear emotional boundaries. Join an organization.” Food for thought… Will keep you posted on any ideas about that I can implement… I have thought too long about this all already!!

Sarah has a bitters recipe on her website, using Seville oranges. Since I can not find those I explored ideas for substitution and am off to make my version using what I do have available to me. I need to finish my elder wand and strain my rosehip honey, two other suggestions to do in January.

The research handout for this exercise about the humors, was written by herbalist Christopher Hedley.

This was really interesting but sounds very complicated! I'm familiar with the idea of the four humours but didn't realise that it is still current. I always associate the humours with the 16th and 17th centuries.

What a lovely & very interesting read laced with some fine sensible intentions. :)
I had to actually look up the meaning & description of all humours I'd totally forgotten about them.
You mention fish, I've really been thinking about the sea, all it contains & all it seems to mean. It does bring us so many goodies in which we can utilise to thrive. Makes much sense on a bigger picture scale. I think many of the sea weeds, plants & corals too will eventually hold great healing properties as well the fish & equally as well as our Earth ones. We just don't know enough yet to utilise Natures pharmaceutical hubs :).

Thank you for sharing :)

I think I made it more complicated than it is, Rowan! lol! bIt is interesting seeing them considered in this day and age, isn't it? Something new for me too!
Paules, you are exactly right in your ruminations! We just don't know all the hubs and their bounty! Why it is so important to keep fighting the good fight to make folks accountable for what happens to our waters!!
thanks for visiting ladies xx

Great and lovely blog post, It seems to be useful.
Herbal incense wholesale