Decorating with Rose and Comfrey 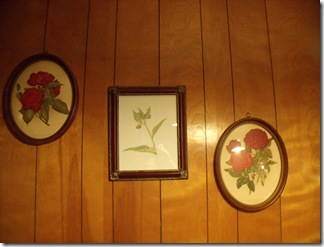 Rose and Comfrey are two of my allies I chose for my participation in the Springfield Sanctuary Apprentice program this year. Wanting to incorporate these lovelies in every way I could think of, in my life this year, I decided to redecorate the wall above my kitchen table.

The two rose prints I found at a yard sale many, many years ago. They were  just so beautiful, I had to buy them. They have travelled with me through my life’s journey for at least 25 years now. 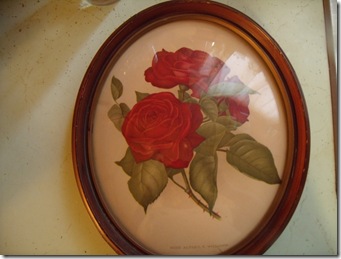 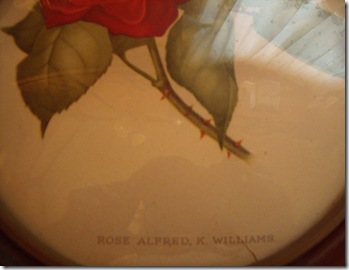 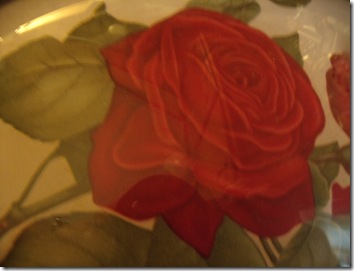 I have been enamored with learning the history of roses, and in particular, how they have received their names. In the course of pursuing this, I have had to learn new terms, such as “sport”, which refers to when nature pulls a genetic surprise and creates a new rose from another! I explain this term as it comes up in this bit I could find out about the Alfred K. Williams rose. Seems A. K. Williams is the sport of a French rose named General Jacqueminot,  who was an offspring of Glories des Rosomanes and Geant des Batailles. From what I can figure out from different sources it was introduced in 1877! (1877 — Schwartz, France)

From The Garden: An Illustrated Weekly Journal of Horticulture and All Its Branches, March 24th, 1894:

A.K. Williams When this Rose was sent out in 1877 by Monsieur J. Schwartz it was considered to delicate a grower...However, now it has got over the strain of excessive propagation, I find it a fairly good grower and hardy....it has probably won the medal as bieng the best Hybrid Perpetual in the show oftener than any other Rose...it is one of the most perfect Roses of its type-imbricated...Deep carmine-red when first opening, changing to a more or less magenta hue with age, every flower bold and upright, with good lasting powers and exquisite fragrance...It is not so long-lived as many when grown upon the Manetti...the Brier stock gives a more lasting bloom, and is much the best for autumnal flowering. A.K. Williams is useful for forcing, making a near, compact plant, and carrying from three to twelve blooms at one time in a 6-inch or 8-inch pot.

Rose (H.P.) Alfred K. Williams. This beautiful Rose was sent out by Schwartz, of Lyons, in the autumn of 1877, and flowered for the first time in my Rose garden the following summer. From the very first flower I...discovered that it was a Rose of great promise...A few complaints have been heard regarding its being a weak grower...misgivings to which I give no credit...I find it does well as a standard, and also on the Manetti, but I am inclined to think that the Brier is the best stock for it. Colchester. B. R. Cant...
In growth I should describe A.K. Williams as being between Duke of Wellington and Lord Macaulay....growth may be set down as moderate. The wood is thorny, the spines being what the rosarians call red. The form of the flower is perfect, being beautifully imbricated and of the brightest carmine-red...No Rose, if I omit Gloire de Dijon and La France, is more thoroughly perpetual....As regards constitution or durability, can it rank with Alfred Colomb...?I fear not...One great thing...is that it grows alike freely on Manetti, seedling Brier, and standard Brier. 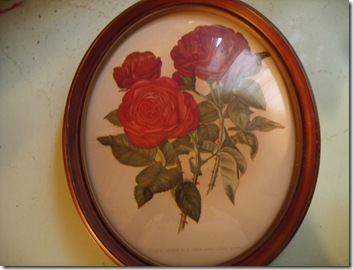 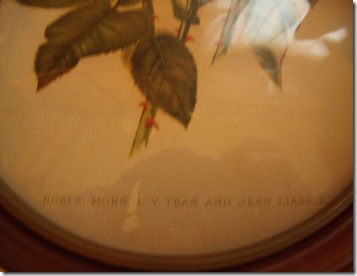 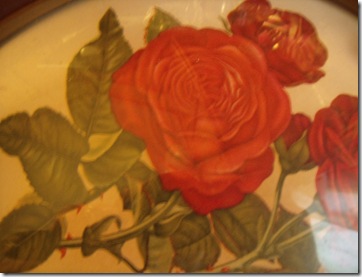 Now the next one says Monsieurs  E.Y. Teas and Jean Liabaud, two different roses in one pictures. From the same source I find scant information on either rose.

The other picture I know exactly where it came from. A dear friend named Lucinda xx 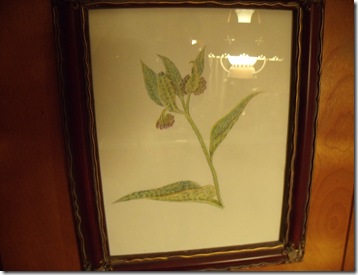 Hugs to all who visit Comfrey Cottages xx

I love your newly decorated wall Leslie. The Rose pictures are very nice and so is the comfrey. You are absorbing into your being with every glance at their beauty.

Beautiful Pics and great info , enjoyed reading about the roses.

The roses are lovely though none of the names are familiar to me so they must be either only available in the US or have fallen by the wayside since the 19th century. Comfrey is always with us though - a favourite herb of mine.

These are beautiful pictures Leslie, they look lovely on that wall.
Hugs to you XXXXX

Oh Leslie, how wonderful to see the little comfrey on your wall. I'm so glad it found a good home with you. I must tell you, I have just signed up to a little six week botanical illustration evening course which i am so excited to start. I have never had any formal training so I hope to learn some good tips!

We also have rose prints on our wall, one of Celsiana, a damask rose which I love and have planted a new bare root of this year and another yellow rose whose name I don't remember. And I have a print from an old book of borage in the kitchen which I have had for many years.

Pat-Thank you! You are exactly right! My intentions were just that:) xx
JoyceAnn- Thanks sweet lady xx
Rowan- I am unsure of their availability here either. Since they originated in France, perhaps there would be the spot. My websearch for them was scanty, although I do find the A.K. Williams is still available!xx
Hugs to you my Rita xx thank you!
Lucinda-How exciting about the botanical illustrations course! You do such a beautiful job now, I look forward to seeing your work afterwards:) What fun! I dearly wish I could find such a course here!
Do you also almost catch their scent as you walk by your prints? How lovely you were able to plant a rose that is one of them. Yellow roses are so cheerful! A great favorite of mine:)I imagine that borage print is very pretty! The bees would gather at the window to see that one! lol!Much love to you dear. I just cherish your comfrey picture!
love and hugs to you all

I am having having staying and spend reading on the blog and seems to be helpful details.
Herbal incense wholesale