We put into the river at Liverpool. There are several stunning old cottonwood trees at the dock. These trees withstand deep flooding, ice, and the full brunt of anything else Mother Nature throws at them while they stand guarding the Illinois River banks. 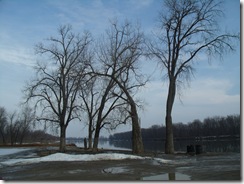 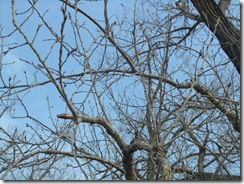 Once you make friends with cottonwood, one of the fun things about collecting the buds, is that many times you can find fallen twigs under them.  Which is a very good thing, because the mature trees are certainly out of reach! The tree that it leaning, in the above picture, is just amazing, this is what its backside looks like! 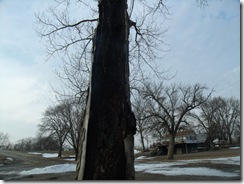 lightening struck! It still it puts out new growth and stands stalwart.

We were surprised to see the river unfrozen bank to bank. They must have the locks wide open upstream and down.

Right away we started seeing Bald Eagles. We try not to get close to them, not only out of respect, but it is also illegal to disturb them, so a few of these pictures you will see just their shape at the top of trees, although I do have one fairly close picture of one and a picture of a nest also:) I quit counting after we had seen 30 eagles, both mature and immature birds.

We rode down the river to the spot on the bank we wanted to dock and get out to walk. The snow was still very much there on the bank that is between the river itself and our special lake although, we did see bits of green life in spots that were melted.  The lake itself was still frozen over completely.

The cottonwoods were equally as tall at this spot as they were at the dock. Our severe spring floods, of the last few years, seems to have taken out some of the younger ones and left the old giants. I spent a good bit of time just searching the ground for fallen branches with buds. I got a nice bit, but some of the buds just didn’t have that beautiful smelling resin to them, so were unusable. Those had probably been lying in the snow too long. I think that with the ones I managed to get, that are beautifully resinous, I am going to infuse some  in a minimal scented oil as I just love, love, love the smell of our cottonwood buds, and would like to have some oil not just for its medicinal properties, but as a lovely natural perfume:) Cottonwood buds resin, also known as Balm of Gilead, is anti microbial, anti inflammatory and analgesic. It stimulates skin healing, and can be beneficial if you suffer from eczema. I have had good relief using it for the itch and pain of shingles, myself. Others in my little tribe find it helpful for cold sores. Both shingles and cold sores are caused by the herpes virus. Makes me think it might help give relief to those who suffer from genital herpes also. Little side note, if you are prone to cold sores, you might try adding foods rich in L Lysine to your diet. I have seen it work for relatives who have done so, or who have taken lysine supplement. Some of the buds will be infused in oil for making pain relieving salves for aches and pains. I am going to make some of them into a cough reliever by infusing them in my honey also:)

While looking at the ground I kept seeing signs of the many deer who live in these woods. Not only their many tracks in the snow and mud, but many droppings I kept almost stepping in :)

On our way back to the dock, a heavy misty fog was settling in. It made a quite mystical scene with the full moon rising.

We happened upon a family of beavers, but I didn’t get a good picture of them. We counted six, before they dived under a sheet of ice. We cut the motor and just sat there for awhile, but the best I could see was just a head poking up near the far bank, where it was melted a bit, as they just stayed out of sight until we left:)

My granddaughter Ariana celebrated her second birthday this last week. Another day she and her brother Colin, age four, spent the day playing with Dylan and I.

Big hugs to all who visit Comfrey Cottages xx

so glad to see you here again. ive been checking. sounds like a lovely time. just put up a bunch of cottonwood myself. yum.

What a wonderful tranquil place, it looks stark but beautiful. I've heard of Balm of Gilead but had no idea it came from the resin of the cottonwood buds. Exciting to see Bald Eagles and beaver too.

What a great day! The area is beautiful and you were so lucky to see the bald eagles and beavers.

Thank you ladies. Latisha, we had a death in my little tribe. my daughter in laws brother had an accident and passed away, so I was super busy with helping out there and just didn't feel like visiting too much the last two weeks:( thanks for checking on me xx
Rowan, I love the river:) Beautiful year round and as you say, the starkness of winter has its own special peaceful beauty. Balm of Gilead, as in the bible, is almost certainly not this tree:) Several different plants have been given that name in different locals. This is just our Americanized name for the buds:) I can't wait to catch up at your blog. You always make me want to take a walk with you xx
Hi anke! Miss you my friend and will be trying to catch up with you and your busy family too! Are you all feeling well now? xx

What a magical day. I can't believe you saw 30 bald eagles before you stopped counting!
In the UK, Balm of Gilead refers to a shrub, Cedronella canariensis, I was quite confused when I started reading US herbals which spoke about this majestic tree.
Sorry to see your sad news, my thoughts are with your family.
Lucinda xx

Thank you for adding here, about which plant is called Balm of Gilead in the UK. I have read about it, but never met it.
I really need the river to blow through my hair, Lucinda. Even though it was quite chilly when the boat was moving! Just a very sad, tragic loss. Poor guy. And his parents.. my gosh, it just isn't natural feeling when a child goes first:( I appreciate your kind words. I have 30 books laid in stacks, and even part of my blog party post done. I just had no time and then no energy:( Maybe another walk would help:) big hugs xx

And big, big, hugs to you too.

Did you get my email Leslie? Do send me your address when you have a spare moment.

That sounds like our kind of day! It was also very interesting to read about the cottonwood too. I don't believe we have cottonwood around here, but I could be wrong. I'll check with hubby and the neighbor on that one. Bald eagles would be very exciting to see, and a family of beavers too. Glad you were able to get so many photos!
Take Care,
Ulrike

Glad you are feeling better Leslie. Things like that really make other things seem unimportant at times.

Looks like I have been neglecting my blog and have missed some lovely comments. So sorry!
Lucinda, we have caught up in email, I knowxx bless you for your kind words and love
Rita, I am thrilled to hear the eagle is your special bird!I will remember that my darling friendxx
Ulrike, I don't think you have these trees either, you are surrounded by many, other beautiful trees;) xx
Thank you Deb. The river always helps mexx
I am working at catching up with all your beautiful blogs too. forgive my absences lately. love you all xx