Rolling Down the River

This time of year, my husband and his friends that duck hunt with him, start fixing up their duck blinds on Clear Lake. This lake is located right next to the river. We have to launch at Liverpool, drive down the Illinois River a ways, take a cut near Emiquon that is called Goofy Ridge Ditch, drive down that, cross over a levee (which is covered in water right now. we have been in flood stage forever),  and then we are at Clear Lake. Two of the blinds were a mess! The winds and ice had forced them into the willows and the beaver had been at them! lol One of them is just being used as a larder by one beaver. Just filled so full of willow for the beavers supper that it is half sunk! lol Just like last year 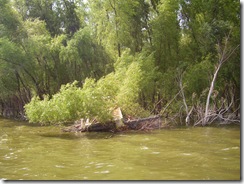 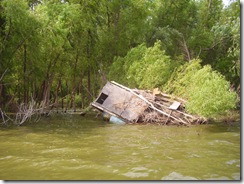 Can you see how full it is? All those willows will have to be raked out, being mindful that a pissy beaver, or snake doesn’t come out of it!

One of the other blinds was just basically beat up and destroyed by Mother Nature and the beavers. We took a couple of trips to get this far in the repairs 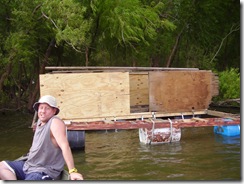 That’s my brother Eric in that picture. 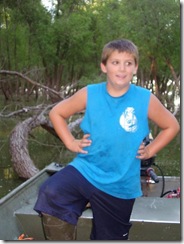 And grandson Evan, who just turned 9 on the eighth. Hard to believe that little baby is now such a big guy he is most helpful and handy to have around! Been my chief lawn mower this summer too! 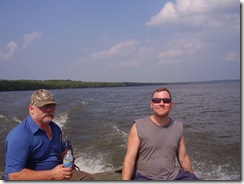 All along those banks are just tons, and tons of willows. That west side of Clear Lake is just separated from the Illinois River by a strip of woods, which is in flood stage right now. On the north bank, is where the pelicans are always roosting. We never had pelicans here when I was a youngster. They are residents now. All around the east bank is cottonwoods, jewelweed and other water loving plants. 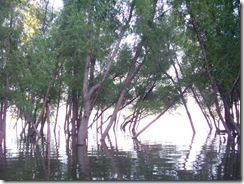 That shows that from the west side of the lake you can see clear through to the river right now. 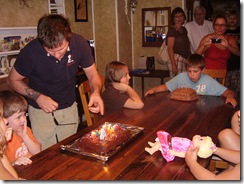 We raced off the river in time to celebrate two birthdays. Evan turned 9 and Colin turned 4. Our blessings continue

Oh my, that's a lot of water... Guess you had way to much and we really, really need some rain. It's been very hot and dry here. Happy Birthday to the boys, hope they had a great day!
Take care,
Anke

They did have a good day Anke! Thank you:) We had been a dry spell before the last few days. But all spring and into June we had rain every two to three days. Not good for gardens that late in the season. I think I have harvested a total of two tomatoes;(
big hugs to you

Now that is a ton of water! I know that you guys have had so much of it while down here we have been roasting! We finally got some rain yesterday and today. Loved seeing the photos, different parts of the state is always so interesting to see, that's why I love blogging!
Take Care,
Ulrike