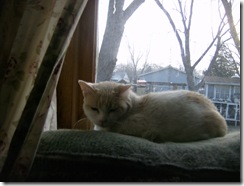 (Rose on her cushion in my den overlooking the back gardens. This is her special spot and I discourage the other kitties from taking over here.)

Oh the poor little thing. You are being such a good mama too! We had a rooster who had done something to his leg, but we left him alone. As of right now he is able to stand on both feet.
All of those herbs sound interesting. I am always wanting to learn more. I'm sure that Rose Marie will be back to running around before too long. I had to laugh over the hot flash, seems like a lot of that is going around these days!!! As always Leslie, a really good post, and I do hope your kitty gets better fast. Glad to see you posted again!
Take Care!
Ulrike

I'm so sorry to hear your kitty is injured. The poor girl! I'm so glad she has you as a mama! <3

Sorry to hear about Rose's problems, but I'm very impressed by your treatment and confidence. I wouldn't know where to start! Hope everything continues to improve.

I'm so sorry about your poor little Rose. Good thing she has you and you take such great care of her. Hope she has a speedy recovery!

Poor Rosie - but she's getting wonderful doctoring! I'll have to contact you when I've got kitty issues.
w

Poor kitty, I hope all goes well for little Rosie.
You are a great kitty mama :o)
Love & hugs to you both my dear friend

Sorry to hear about Rose Marie , but it sounds like she's in good hands. Hope she makes a full recovery soon , I know how hard it is to take cake of an aging pet.

Your treatment sounds wonderful, I'm sure she'll make a full recovery with such tender care.
Best wishes to you both.

awww thanks ulrike, joyceann, rita, wendy, anke, julie, sarah, sue and lucinda:) she did try to stand up this weekend and she tried to get to her little shallow litty tray this morning. slow and steady. i do worry about her loosing muscle mass though:( her age is slowing her recovery and i am a tad impatient too! luckily she seems quite content:) hugs to you all

Well, Goodness Gracious! I must say Rose is so very lucky to have you in her life!

Snow, Snow, Snow over here has kept the kids home and me off the computer too! Keep us posted on your little one.

Sorry about Rose Marie. A big sneeze for her! Hope she is doing better, Leslie!

thanks nancy and lisa:) she is better. i need to make time to post about it! love to you both:)

Hi Leslie ~ Blopped over to see how Rose Marie was doing , read you comment , happy to hear that she is doing better.