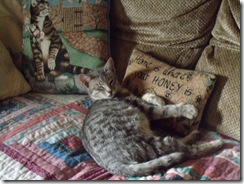 It must be spring. Every spring my daughter or I end up with poor neglected cats on our porches. This little lady was in a very sorry state when she arrived at my daughters. Emaciated, pregnant, grievous dog bite injuries on a hind leg, and under her tail. She came limping up and I was terrified that her entire leg was disjointed or broken. One of her wounds removed all of her hair from near her knee around to the back of her thigh. Deep bite wounds there, with a large area raw and oozing. The knee and lower leg also had deep bite wounds.  Some of you might be squeamish so don’t look at the album. It hurt her for me to move the leg in order to document her injuries, so these pictures really don’t show the total extent.

That injury extends all the way to the bend of her leg. A similar type bite entry wound there.

Michelle had recently adopted a blind kitten she found, so I took Peppermint home with me. Besides the fact I am home during the day and Michelle works outside of the home, we thought Peppermint would require close watching and tending.

When I got her home I first kept her isolated from the other cats in my den. First order of business was to let this little cat know I cared about her and that she was now safe. You see, we have a good idea where she came from and saw the despondent, “I give up”, look in her poor eyes. She responded within a short time just to being petted, in a quiet safe room, fed and watered well and given love:) Very soon her little motor was purring full tilt! Since she was by nature a friendly wee puddy cat, I gently started to explore her wounds. This all occurred late two Fridays ago, so I was pretty much on my own and I am not a veterinarian, but I didn’t think the leg was broken or disjointed, but just could hardly bear weight due to the nature of the dog bite wounds. Next step was to decide what herbal helper I could use on her wounds to help them heal. With some of the wounds being so deep, large area of super sensitive skin exposed, and her pregnancy I thought about it and decided that a yarrow and calendula water extraction, cooled and then applied would be appropriate. I used a little glass spray bottle to apply  it. Very handy especially with having to quickly lift her leg a bit to apply it to the inner upper thigh also. Within 3 days there was marked improvement and Peppermint was able to put much more weight on the leg. She put on weight, her eyes became bright and alert, she was released from isolation and assimilated into the clan of other Comfrey Cottages Cats:)

I keep my cats indoors and they are never exposed to other cats, and thus their different diseases, so the next Tuesday, (we got her on Friday), when the vets was open, Michelle took Peppermint in for a visit to be tested for Feline Leukemia and Aids and to look at her wounds. The vet told my daughter the wounds looked clean and told her whatever I was doing was working:) With her clean bill of health and re-interest in life, it was fun to let her out of the den and watch her interact with the rest of the cats and my hubby. When I sit down on the sofa, she is right next to me, and crawls up on me with her little paws wrapped around me, as if she is trying to give me a big hug:)

I know many of you will be aware that yarrow is on the toxic list for cats on the ASPCA website, and that other sources will alert you not to use yarrow with pregnant cats. When I first began applying the above to her injuries, she was too weak and apathetic to even lick herself, so I am sure she got none of it internally, and I believe yarrow is perfectly safe used externally. I think the ASPCA website is only referring to yarrow internally, although I will say, I have never had a problem with using it internally, with other cats. I am staying away from giving Peppermint anything internally that is rich with volatile oils though, due to her pregnancy. As always, I am just sharing what I am doing and not trying to give any medical advice, so do your own research and make your own decisions! :) Now that she is  responsive and can move her leg , she is licking her wounds, which is of great benefit in her healing process.

I continued the yarrow, calendula and added rosemary in a separate spray bottle, but when some of the wounds closed more and stopped draining as much,she developed an abscess, on the inside part of her thigh that was so raw looking, but wasn’t draining. The bite wound had encompassed her whole thigh, both on the inner and the outer sides, and the wound on the outside had scabbed over, while the inner thigh wound has still been open and seeping some. So , I  made repeated plantain poultices and the open wound then leaked out large amounts of pus and the abscess greatly diminished. Eventually the swollen up part also opened up and started draining.

Making these herbal helpers, I do snip up some plantain in a bowl and put a little just before boiling water in it. Then I take a whole plantain leaf and roll and crush it in my fingers, place it on the wound, and then dip the medicine cloth in the hot solution and apply it over the leaf, and hold it there until it gets cold, and then repeat, for a total of about 15 minutes at a time about 6 times per day. The first pictures in this album show the abscess before the plantain poultices, and the last picture after a day.

After three days of using plantain poultices and spray, (with periodic sprays of rosemary or yarrow/plantain spritzes), the whole area is very close to normal. During these last three days I have also applied Manuka honey to all the wounds, several times a day. I had a friend share this honey a few years ago, and I have saved it back for a time when I really had a hard to heal wound to deal with. Within hours of first applying it, I could see so much healing happening! Any good organic honey would help, I just happened to have this.

So dear little Peppermint has been occupying a lot of my time and focus for the last 21 days. I will keep you all posted on her progress and any changes or additions I might do with her herbal regime. I have cleared out the bottom of my den’s closet and covered it with towels and am hoping she decides to use it for her birthing den… I wouldn’t be surprised if she just used the rug at my feet she is lying on as I type this though, right in the kitchen:) lol!

During this journey, I did also use green elder leaf and marshmallow poultices during the first couple of days. I did like the wound response best when using the yarrow and calendula though. And the rosemary when the wound was a bit less raw. I think that there was a nice progression of improvement all along, with the only set back being when the wound up on the inner thigh gotten swollen. But beautiful plantain did an excellent job of drawing it all to a head and getting it to drain. The honey was especially beneficial and I will certainly use it again if I have to deal with an injury like this.

Again, I am just sharing with you how herbs have helped dear Peppermint:) I am not professing to be a veterinarian! Do your own research and make your own decisions, although I will gladly discuss this further with anyone interested:) I will share kitten pictures when they arrive!

The poor little thing. I'm just glad you guys found her and are taking such wonderful care of her.

thank you Anke:) She is so happy now and feeling very well. The kittens are sure kicking!

Sounds like her middle name should be "Lucky" lol. Love those kitties and happy to have some ideas for herbal healing for them!

That is wonderful that she is doing so much better thanks to her nurse! It is very interesting all the herbs being used that way. I had to take our dog to the vet as her ears were bothering her so I have drops now. It also seems that even dogs can develop allergies during this bad pollen season. Do you know of something that might help her? It would be interesting.
Take Care!
Ulrike

Herbal remedies are wonderful. It's like you said one has to knowledgeable when using any kind of herbs. A Chinese Doctor once told me people overuse herbs and that's why they can be harmful, for that matter any medicine overused can be! A very lucky cat to have found you and to be given a second chance. <3
I'd love your company on my Summer Porch.
Have a great weekend,
Hugs Rosemary...XX

Leslie it's so wonderful to hear how well she is getting on thanks to your devoted care. I'm always a bit nervous of using herbs with my cats as I know so little about their physiology compared to humans. Its really great to hear how you are using the plants as it inspires confidence in me. I have signed up to do a course later in the year on helping cats to self select remedies, it should be very interesting... I'l let you know!
Well done for being such a superwoman and much love to little Peppermint!!

Leslie, you never cease to amaze me with your compassion, patience and skill in treating your feline friends. I hope Peppermint delivers easily and you are able to find good homes for her kittens.

Yay! Leslie, I <3 this story and am not surprised at all!

I can't wait to see your kitten pictures!

Poor little kitty.
Peppermint is luky that you take care of here.She look a sweet kitty :)

I've only just seen this post - how lucky Peppermint is to have found you, her instinct must have brought her to the right place. Yarrow and plantain are both very ancient wound herbs and honey is also well known for it's healing energies. I'm so glad that this little cat has finally found a safe and loving home.

With the help of Dr. Nicole Apelian, I was able to pinpoint the 3 most important plants you need to add to your diet to fight viruses, including coronavirus.

Together we've gathered ALL the remedies and medicinal plants of North America and included them in one book: The Lost Book of Herbal Remedies.

Unfortunately, there is a huge rush to buy this book right now as people are preparing their pandemic supplies. I've barely been able to spare 100 copies for my website members here.

So, if you can act fast, you might still find a copy reserved in your name.

With this book, you'll get the most powerful natural remedies that grow near you

>> The most powerful remedies growing in your state