another sigh of relief! 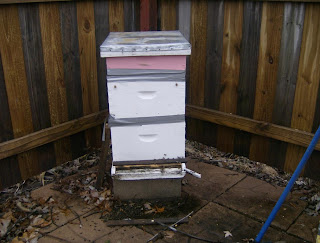 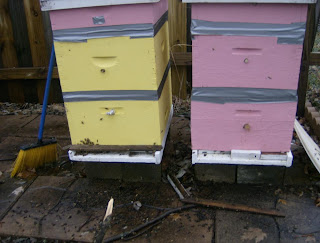 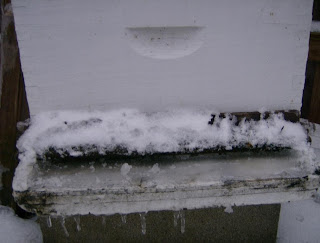 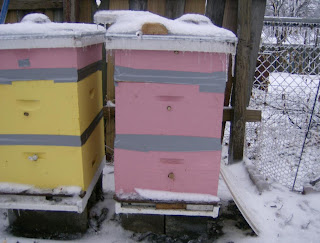 well here in central illinois it has been a wild and wooley ride weather wise, since december 19th. we had a terrible ice storm hit at that time and i worried so for the bees! just look at the thick damn of ice on the hives landing boards! well it stayed looking pretty much like that until today! overnight we had warming temperatures and rain, so today i dashed outside, after waking and was so happy all three hives had bees flying! got busy and refilled the tophive feeders, (more on those later), and cleared out the bottom boards with my trusting thin metal rod and swept up yet more dead! i was delighted that the pink hive was still viable. i had been so worried, as i would live with alot of guilt on letting that hive get too wet before, thus weakening it! since i took todays pics with the bees flying, terrible rains have came so in an in between squall time i went out and just encased the hives in drop cloths, but leaving a bit open at the bottom in case any bees want to fly. just don't want them any wetter but will take the tarps off tomorrow if weather is dryer at all. don't want to hold the moisture in on the hives by leaving the plastic over them!